Brexit - the Impact on Intellectual Property 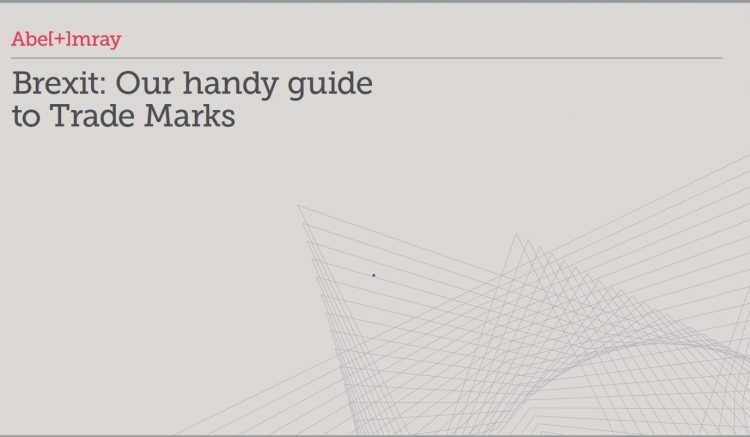 The UK has now left the EU. However the position for IP will remain largely the same until the end of what is known as the transition period, which is due to run until 31 December 2020.  The transition period could in theory be extended, but the UK government has indicated that it will not be seeking any extension.

We set out below information regarding Brexit and IP with suggestions for what you might wish to consider over the coming months.

"The European Patent Office (EPO) is not an EU institution and the prosecution of European patents and the EPO will be effectively unchanged."

The most important message is that no rights will be lost as a result of Brexit.

Article 54 of the Withdrawal Agreement confirms that the holders of European Union Trade Marks (EUTMs) and Registered Community Designs (RCDs) registered or granted before the end of the transition period will be given equivalent UK registrations. That process, which will take place at the end of December 2020 assuming no extension to the transition period, will be automatic and without any official cost.  The new, equivalent UK registrations will enjoy the same filing date and, where appropriate, the same priority date as the original EUTM or RCD.

Holders of International Registrations designating the EU under the Madrid or Hague systems will also be granted equivalent UK registrations (rather than UK designations).

The holders of EUTM and RCD applications (or unpublished RCD registrations) which are pending or unpublished at the end of the transitional period will have a nine-month period (i.e. until 30 September 2021 assuming no extension of the transitional period) in which to file corresponding UK applications for the same marks and designs.  Those new UK applications will accorded the same filing date and, where appropriate, the same priority date as the original EUTM or RCD.

"From the date of actual departure from the EU it will be necessary to seek protection in the UK for trade marks and designs separately from the EU."

What should I be doing before the end of the transition period?

For the holders of existing EUTMs, there is no need to re-file the same mark in the UK.  However, there may be circumstances where that would be a prudent step to take, particularly if the mark has been registered for more than five years.  Although evidence of use in the rest of the EU will still count in the UK in the five years after the end of the transition period, that evidence will be given progressively less weight over the five years from 2021.  Similarly, although the use of a mark protected by an EUTM in the UK in the five years before the end of the transition period will count as use within the EU, the effectiveness of that use will erode over the following five-year period.  In those circumstances, it can make sense to update your protection for those marks or similar marks.

The primary functions of the UKIPO of registering UK designs and trade marks, and granting UK patents, will continue unchanged.

The EPO is not an EU institution, and the prosecution and opposition of European patents and patent applications at the EPO will not change.

The rights of representation at the EPO of UK-based European Patent Attorneys will remain the same and it will continue to be possible to designate the UK on European Patents in the same way as for other non-EU EPC-contracting states, such as Norway and Switzerland.  Abel + Imray have had a presence in Munich for over 35 years, and we will continue to represent clients before the EPO in our usual way.

The UK Government announced in March 2020 that consistent with its aim for UK sovereignty to be unimpinged by the jurisdiction of the Court of Justice of the European Union (CJEU), it will no longer seek to participate in the Unitary Patent system.  On 20 July 2020, the UK formally renounced ratification of the relevant treaties which had not yet come into force. Whether or not the Unitary Patent system will happen without the UK has been thrown into doubt by a ruling of the German Constitutional Court which puts a question mark against that country’s participation.

Without Germany and the UK participating, there are serious doubts as to whether the Unitary Patent system will enter into force at all, and no change to the present arrangements for the validation and litigation of European Patents will take place in the foreseeable future.  We are of course monitoring the situation and will update this page as more information emerges.  For a more detailed look at the Unitary Patent System see our UPC page.

Supplementary Protection Certificates (SPCs) are important rights in the pharmaceutical and plant protection industries.  SPCs are national rights that exist separately for each EU state.  It is expected that the UK SPC regime will continue with little or no change of substance, though the link with the CJEU (the highest appeal court for SPC matters) will change.

If you have any queries relating to this topic, get in touch by sending an e-mail to brexit@abelimray.com or to your normal contact at the firm.  We are here to assist you in respect of all of your IP needs in the UK and across the EU both now and in the future.